President Jair Bolsonaro has not yet arrived in Los Angeles, the host city of the meeting.

Pedro Castillo of Peru was the first president to speak – his country had hosted the previous Summit of the Americas.

Biden: Our duty is to defend democracy

It ended with the motto of the Monroe Doctrine, America for Americans (an American policy in the early nineteenth century to prevent European influence on the continent).

Joe Biden Then he took the stage to speak – the Protestants interrupted his speech, but the American president spoke again after he smiled.

The US President gave a speech in which he praised democracy and criticized the war in Ukraine.

He said that the countries of the continent should increase food production, and that it was necessary to make logistics networks more reliable.

He spoke of migrant flows across the Americas and announced the launch of an economic plan (see below).

Earlier, before the start, Biden received leaders and representatives of the invited countries who arrived to attend the event.

The United States was the organizer of this edition of the Summit of the Americas. The Biden administration described the summit as an opportunity for the United States to reaffirm its commitment to Latin America after years of comparative neglect under its Republican predecessor, Donald Trump.

But tensions permeated the preparations. 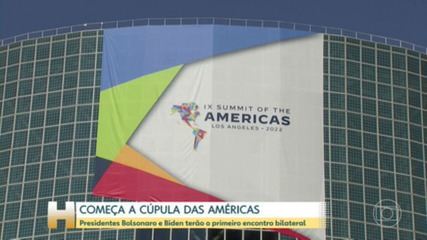 Diplomatic cracks began this week when the US government chose not to invite Cuba, Venezuela and Nicaragua, arguing that its record on human rights and democracy made that impossible.

In his request, the Mexican president refused to invite all countries and said he would stay away, distracting from Biden’s goals and regional divisions.

The leaders of Guatemala and Honduras, two of the countries that send the most immigrants to the United States, have also said they will not do so, undermining efforts by Biden officials to draft a “statement” on joint plans to address the phenomenon.

Uruguayan President Lacale Poe also did not travel, but for another reason: he tested positive for the Covid-19 virus.

However, leaders of more than 20 countries in the region will be present, including Canada, Brazil and Argentina, according to the organizers.

The first face-to-face meeting between Biden and Jair Bolsonaro is scheduled for Thursday.

Building with the Summit of the Americas logo in Los Angeles, USA – Photo: Mike Blake/Reuters

The Biden administration unveiled a new proposal for a US economic partnership with Latin America on Wednesday.

In an effort to counter China’s growing sphere of influence, a senior US government official said Biden is offering US neighbors to the south an alternative that calls for greater state involvement, including increased investment, strengthening supply lines, and the evolution of existing trade agreements.

However, Biden’s “Partnership of the Americas for Economic Prosperity”, which is apparently still in the works, has failed to deliver tariff cuts and, according to the US official, will initially focus on “like-minded partners” who already have trade agreements with United State. The official added that the start of negotiations should start at the end of September.

US President Joe Biden arrives in Los Angeles for the Summit of the Americas on June 8, 2022 – Photo: REUTERS/Kevin Lamarck

Biden is expected to detail his plan in a speech later Wednesday to formally open the summit, which was originally envisioned as a platform to demonstrate US leadership in reviving Latin American economies and addressing immigration pressures.

US officials hope that the Summit of the Americas in Los Angeles and a parallel meeting of chief executives will pave the way for greater economic cooperation in the region as countries, amid rising inflation, work to bring supply chains together.

“It is better for us … to have a supply chain here in the Americas than to rely on a supply chain that comes from China,” Ken Salazar, the US ambassador to Mexico, said during the summit.

The US official said Biden is seeking to pressure his administration’s competitive goals against China by launching a new partnership for the region.

Washington, which already has a joint agreement with Canada and Mexico, another group with Central American nations, and a series of bilateral agreements in the region, will seek to develop new standards for customs, digital trade, and environmental responsibility. for power.

New pink wave? Of the 12 countries in South America, only four have right-wing rulers.