The zebra is on the loose! Minas beat Sorocaba (in normal time 3-0 and in extra time 1-0, with a goal three seconds from the end), Sunday evening, at Sorocaba Arena, and advanced to the Quarter-finals of the National Futsal League (LNF).

First stage leader Sorocaba 3-0 win in the first leg And you just need a draw to advance to the next round. The defeat – which captain Rodrygo considered one of the worst in the club’s history – culminated in an early elimination: the Sao Paulo side did not fall before the LNA quarter-finals.

Historical! Six seconds after the end, Liu dodges his head and ranks Minas in the LNF 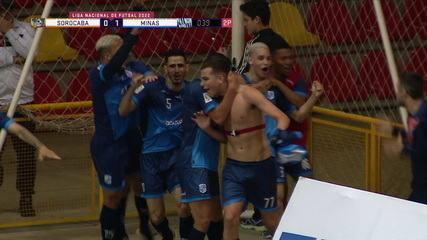 Minas, in turn, was 16th in the classification stage with a negative season (five wins, eight draws and eight defeats) and even then, he had not won a single away match in the tournament.

Minas Gerais needed a win to force extra time, they started with everything and opened 2-0 before the break, with Maya and Luis. At the beginning of the second stage, in another ball lost by Sorocaba, Maya scored the third goal.

In extra time, both teams created good chances to score. Two and a half minutes before the final whistle, Minas put the goalkeeper on the field, and when three seconds remained on the clock, Anderson sprinted into the area, Liu twisted his head and sent it to the back of the net to ensure victory and a mining rating.

With the classification, Minas returns to the quarter-finals of the LNF after three seasons.

The miners’ opponent emerged from the standoff between Santo Andre and Atlántico, who will play the second leg on Monday, in São Bernardo do Campo, at ABC Paulista. In the first match, the Rio Grande do Sul team won 4-2.