It was announced globally last October, But it was introduced to the Brazilian market only at the beginning of FebruaryThe Huawei Watch GT 3 hit shelves with the promise of preserving the goodwill of previous generations.

But has the Chinese giant’s new smartwatch preserved its predecessor’s strengths while overcoming its weaknesses? That’s what you’ll discover next in our full review!

Sold in two sizes: 42 and 46mm, each with three different versions, to adjust not only the color but also the band material, the design of the new Huawei Watch GT 3 needs no comment.

On hand, we have the 46mm version in black – called the Active Edition. It features a high-quality finish, stainless steel construction with a glass front and a high-gloss plastic back. The bracelet, with double ring and model name, is made of silicone and perfectly matches the design and overall quality of the other elements.

With a simple look, at 11mm thick, the case has only two buttons on the right side, the bottom is the function button and the top one, on/off with support for the rotating crown.

The screen, in turn, is AMOLED, it is 1.43 inches in the version on our wrist, with rounded corners and a classic digital sign. It is of high quality, has excellent levels of brightness, vivid color and true black, in addition to its excellent density, it leaves no pixels to the naked eye.

Due to its technology, the screen also has the Always On feature, which keeps the screen always active, making the operation of the smart watch closer to the operation of a regular watch; Something that may sound silly, but this increases the practicality of not having to keep flipping your arm, touching the screen, or pressing the side buttons whenever you want to check the time.

The body as a whole still has a water resistance of up to 5 ATM, which means that the user will not have to worry about performing activities in shallow water, such as swimming in the pool or in the sea.

Equipped with two buttons on the sides, the GT 3 is primarily navigated through the touch screen. The only exception is for a few moments when the rotating crown built into the top button can be operated.

Through it, the user can scroll through the system configuration menus, adjust values ​​in a selector and even zoom in and out of the clock application screen. Don’t expect, however, that all of the navigation—or much of it—can be done through the aura; It will be a few moments. 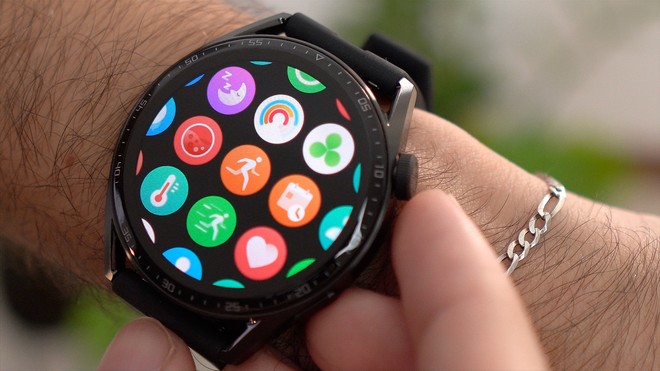 Equipped with a processor that Huawei describes only as “ARM Cortex-M” – which doesn’t tell us much, the new smartwatch comes with 32 MB of RAM and 4 GB of internal storage, of which just over 1.7 GB is available in the user .

Despite the somewhat hazy specs about the processor, HarmonyOS performs very well and gives the impression of great fluidity, unlocking screens and resources as soon as you touch them.

This is what you read! thanks for the It was imposed by the United States a little over two years ago Against Huawei and other Chinese companies, the eastern giant was forced to develop its own operating system, leaving aside Google’s Android. 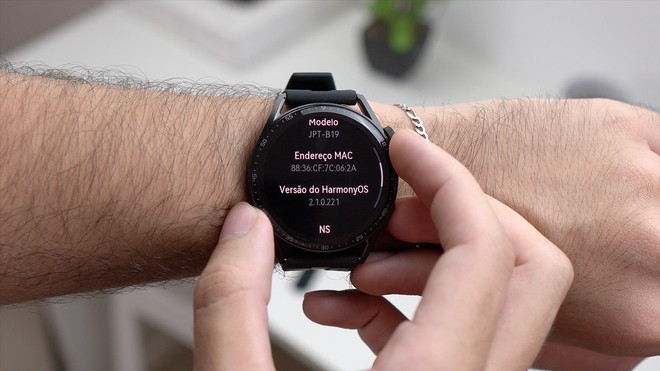 But not all is well. Despite the smooth navigation and the relatively complete set of functions that make it possible for the watch to make everything from making calls to connecting a Bluetooth headset to listening to songs in the internal memory, it is remarkable that we are still dealing with a somewhat immature system when it comes to It’s about third party apps.

Here, the scope of additional applications is significantly reduced. So, until the time of this review, don’t expect to find great apps like Spotify, Strava, MyFitness Pal, and others. In fact, don’t even wait to find an app store in your watch listings.

To download a new application from the shortcut list of available applications, you will have to use Huawei Health; The short download list is only available on Android – there is no Huawei AppGallery for iOS version.

And speaking of the Chinese app, we don’t have anything quite different here for those who have used another wearable from the company or are even accustomed to dealing with health apps from Samsung, Google or Apple. 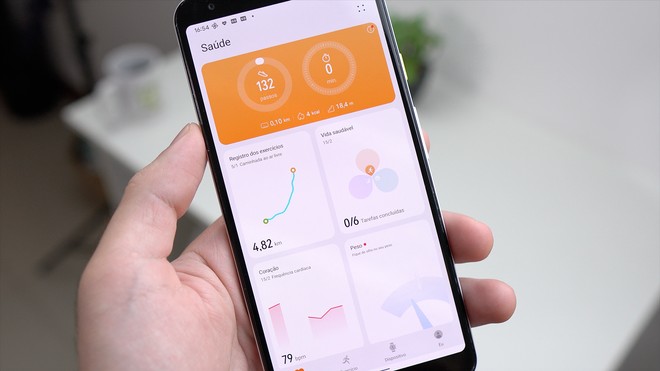 In addition to allowing you to change watch settings, or configure a new alarm or face, Huawei Health collects information collected by the GT 3 in just one place, being able to keep a complete history of user data. The only difference here is the number of data collected.

In addition to the number of steps, heart rate, stress index, oxygen and sleep data, the watch is also able to collect the user’s skin temperature and record physical activity data with good accuracy; Including tracking the route taken for a walk or a run thanks to the built-in GPS. 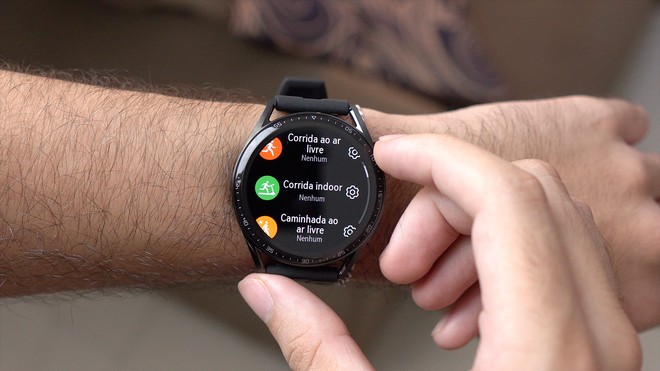 In addition to walking and running, by pressing the training shortcut button on the watch, the user will still be able to count on more than 15 different types of styles, including cycling, swimming in the pool or in open water, jumping rope, trail, skateboarding, skateboarding, Triathlon, elliptical, rowing, among others.

Of course, having a device capable of recording so many details on your wrist is impressive, but it is always worth noting that the information collected does not replace specialized medical equipment, it is another form of entertainment for those who wish to closely follow their physical development.

For example, when comparing the measurement of skin temperature by a watch and a thermometer, we observed a discrepancy of just over two degrees Celsius; Which may not seem like a lot, but it is quite a lot when it comes to that specific measurement. But let’s move on to one of the most important features of Huawei GT 3: the battery. Unlike other smartwatches that usually “die” after just over 36 hours on a charger, the new smartwatch reaches even more impressive marks, showing that the Chinese giant still knows what it’s doing when it comes to autonomy.

In our tests, with all the features turned on — from always-on mode to continuous heart rate measurements, sleep monitoring, temperature, oxygen levels, and everything in between, the watch was able to withstand a full 9 days out of the sockets; A great sign for such a device. 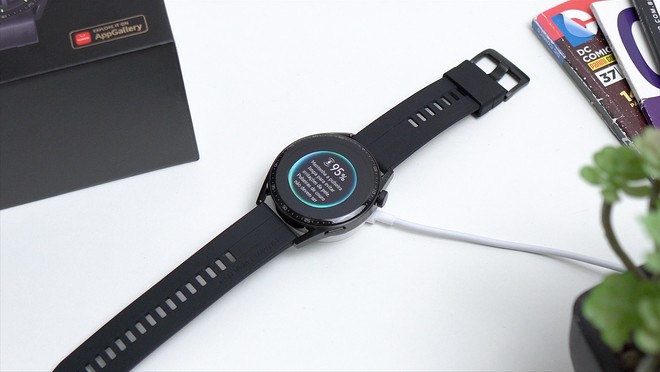 According to Huawei, even if the user does not have such extensive use, keeping the screen always idle and not using too many resources, it is possible to reach the 14-day mark!

The 455 mAh battery can be charged with Qi wireless charging bases or with the small dock that comes in the box. Unfortunately, the total time to go from 0 to 100% is about 3 hours; But let’s discount that factor given the GT 3’s unparalleled autonomy.

Without a doubt, Huawei has suffered huge losses over the past few years thanks to the complications between China and the US, and you can feel some of that reversal here.

Instead of being able to offer a more solid solution to the watch system, such as Google WearOS, the brand is forced to use its own operating system – which, while noting it will have a great future, is still unsatisfactory at some points, such as as third-party apps. 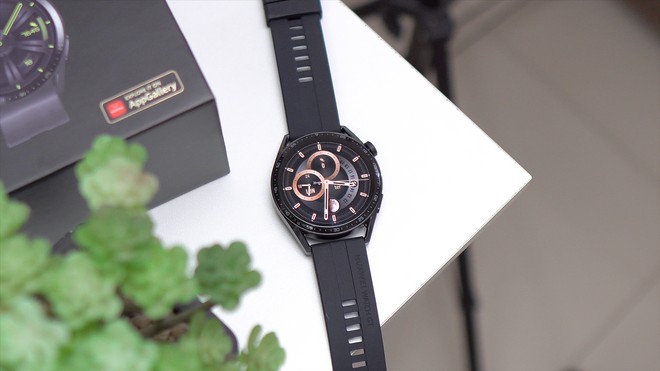 And while this is not an obstacle to the purer use of the Watch GT 3, it directly affects the capabilities of the watch, preventing the user from using their favorite music streaming or from tracking their physical activity rates through another app, for example.

In any case, the GT 3 is indeed a great smartwatch option. It offers greater autonomy than almost any other smartwatch of the same type, as well as an impeccable body, high-quality display and a satisfying set of features for those who want to keep up with their physical activity levels.

The problem is when we put it in front of the competitors. More so if battery and iOS compatibility aren’t key points. 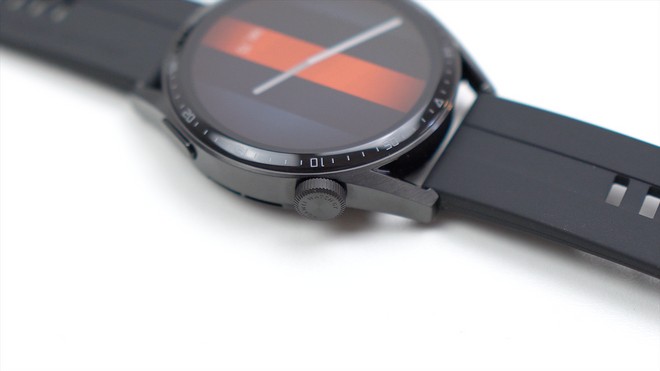 At major retailers, a Huawei watch can be found with values ​​around R$1,400. On the other hand, the 44mm version of the Galaxy Watch 4 can be found for R$1,300, and the Samsung smartwatch has more sensors and its functionality can be greatly expanded thanks to a Play Store full of apps.

Points of strength and weakness

With that, it is up to you to choose the best smartwatch that fits your needs and your pocket. As usual here, the best Huawei Watch GT 3 prices can be found in the cards below! the next day! 😉