For at least 100 years, one of the mysteries that has intrigued astronomers has been the expansion rate of the universe. The American scientist Edwin Hubble (1889-1953) was the first to realize that distant galaxies in the Milky Way were not stationary, but constantly moving, and that the more distant galaxies seemed to move away more quickly. This may indicate that there is a unifying value to explain this phenomenon, but even Hubble, who considered galaxies “landmarks in space”, was not entirely convinced of the correctness of the theory. At the end of the twentieth century, with the launch of the telescope that bears his name, specialists began to rely on the powerful observational ability of equipment to see farther, reaching rates that diverged from each other. Some have indicated that the universe is 8 billion years old, while others have indicated that it is even older, at 20 billion years. Now, after thirty years of intense Hubble research, astronomers seem to have finally come to a consensus.

Analysis released at the end of May from satellite images showed that the expansion of the universe is about 73 kilometers per second per megaparsec, a measure of distance equal to one million parsecs (each equal to 3.26 million years). -Light). This means that the universe will double in size in 10 billion years. That being said, it seems irrelevant and has nothing to do with life as we know it. After all, none of us would be there to witness the changes in such a distant future. For science, the result is invaluable. It’s a shortcut to review some physics concepts.

It really is a big change. “The discovery may point to a way to understand dark energy,” says Roberta Duarte, an astrophysicist at the University of São Paulo. The mysterious force accelerating the expansion of the universe was discovered in 1998, but experts don’t fully understand it until now. It is known, basically, that it occupies 67% of the universe. It just is. “The physics we have today does not explain dark energy. Perhaps it is time to revise the theory,” adds Roberta. A comprehensive analysis of the material collected by Hubble will serve as the basis for the investigations. 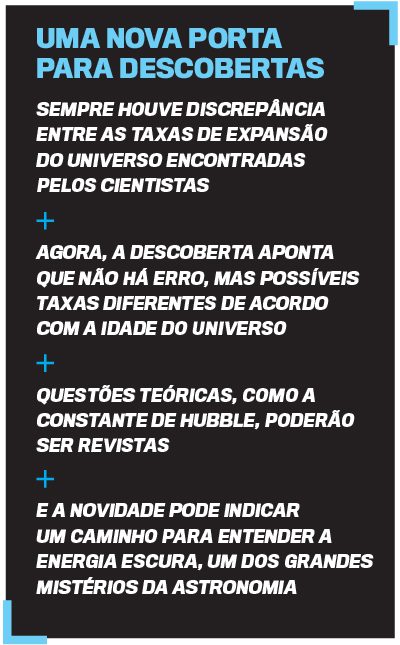 The results, in fact, were only possible thanks to the huge amount of information captured by the telescope. Originally designed to provide fifteen years of research, the Brave has now entered its third decade of operation and continues to amaze. It has played an important role not only in providing scientific data, but it has helped define our imaginations about space. “In many of the explanations for the great mysteries of astronomy, Hubble has been involved in some way,” says the astrophysicist. She says that the equipment offers an additional advantage: its proximity to the ground allows repairs to be carried out in a simplified and therefore cheaper way.

With Hubble retired, it will be the turn of the James Webb Space Telescope to enter the image. It is more technologically advanced, it is able to see objects older and farthest from Earth. Therefore, it will have to participate in a series of missions, from studies of exoplanets to black holes. One of the most awaited research is observing the stars and collecting data on the formation of galaxies. Understanding how the universe formed and what laws of physics govern this expansion is an essential step toward understanding where humanity is heading.