Although most cases of monkeypox (monkeypox) With a mild case, a 35-year-old man, living in London and working in the sexual health service, ended up needing urgent hospital treatment after bouts of pain.

The first symptoms appeared in June, when Aaron Tolunay developed a fever. At first I thought it was COVID-19But then the symptoms began to worry.

Credit: Playback / Twitter / Aaron TolunayThe boy with monkeypox was taken to hospital and had a high temperature, chills, and swollen lymph nodes.

“My lymph nodes were very painful and swollen. My temperature rose to 39.6°C. I was taking ibuprofen and painkillers so I wouldn’t shake. On the fifth day, I just lay on the couch, unable to move, unable to sleep. I felt lonely and the pain was no bearable.”

Only when a blister appeared on his nose was he referred for monkeypox testing. At this point, he is also no longer able to swallow food and liquids.

“When I looked at myself in the mirror, I noticed a small lesion in my nose, but I didn’t think about it much and had no idea it could be smallpox. I thought it was acne or something.”

“After my smallpox tests came back positive, I was sent to the isolation ward of another infectious disease hospital. All I felt was relief because now I knew what I had. But I was still afraid because even though I was a sexual health advocate, I never thought In that smallpox can be this serious. The level of pain surprised me. I also realized how lonely I was. I couldn’t visit my friends or family members. I thought if I died from this disease, I would die alone.” 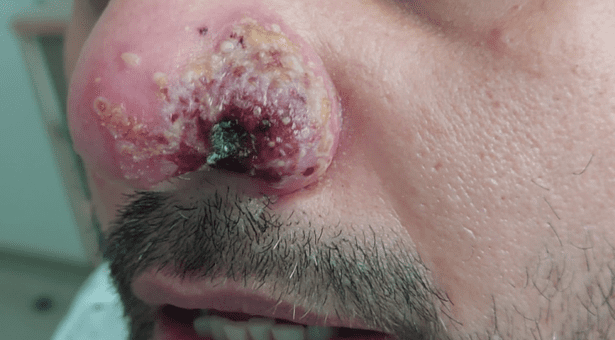 For 10 days, Aaron was treated with tecovirimat, an antiviral agent developed for smallpox that is now licensed for monkeypox by the European Medicines Agency (EMA).

according to World Health Organization (WHO)More international data on the effectiveness of this treatment for monkeypox in humans is needed. 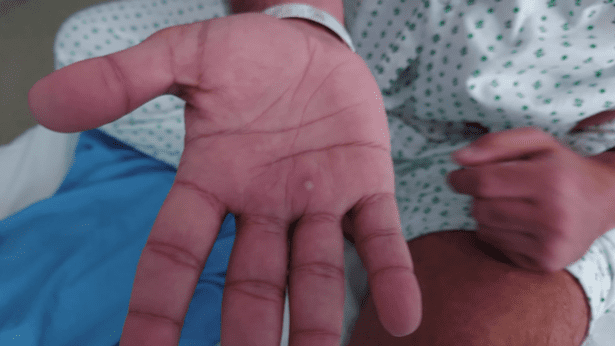 Credit: Playback / Twitter / Aaron Tolunay Bubbles appeared in the palm of your hands

According to Aaron, who was laid off, this was the worst experience ever in recent weeks. “It was worse than covid and I had it twice. I wanted to share my story to raise awareness and normalize the conversation about smallpox. My case is really rare – the person who transmitted this to me was very mild – had some infections but he wasn’t as sick as I was.”

But what is known so far is that the disease virus is transmitted through close contact with infections, body fluids, respiratory droplets and contaminated materials such as bedding.

The incubation period for the virus (time from exposure to first symptoms) is usually six to 13 days, but can range from five to 21 days.

The World Health Organization indicated that the vast majority of cases appeared with a rash, in addition to fever, fatigue, muscle pain, vomiting, diarrhea, chills, sore throat or headache.

but the Centers for Disease Control and Prevention (CDC)from the United States, to a different presentation of the disease in recent cases.

Before that these lesions appeared scattered throughout the body and in large numbers, now this does not happen in all cases. Instead, some people with monkeypox develop a single spot or blister.

Other patients develop a localized rash, often around the genitals or anus, before any flu-like symptoms appear. “And some did not develop flu-like symptoms,” Rochelle Wallinsky, director of the Centers for Disease Control and Prevention (CDC) said in a news release.

According to the Centers for Disease Control and Prevention, many of them also did not have swollen lymph nodes, a standard symptom of monkeypox.

What is known so far is that about 10% of patients have been admitted for treatment or isolation, and only one patient has been admitted to the intensive care unit. The World Health Organization has also confirmed five deaths, all in Africa.

Newborns, children, pregnant women, and immunocompromised persons may be at risk of developing more severe symptoms and, in rare cases, death.