An observatory in Hawaii captured the dramatic moment when the DART spacecraft hit the asteroid Demorphos last Monday night (26). The impact occurred 11 million kilometers from Earth.

The images were taken by Project Atlas, a near-Earth asteroid observation system developed by the University of Hawaii and with funding from NASA. In the video below, you can see the sudden increase in brightness on the asteroid due to the collision, as well as the expansion of a large cloud of debris into space.

Atlas notes of the impact of the DART spacecraft in Didymus! pic.twitter.com/26IKwB9VSo

The effect was also observed by the Les Makes Observatory located on Reunion Island in the Indian Ocean. According to the European Space Agency (ESA), the image was taken 38 seconds after impact – The time it took for the light to reach the Earth. a look:

Close-up of the effect of DART

Before colliding with the tiny Dimorphos, the DART probe launched the Italian cube into space, the LICIACube. The purpose of this small spacecraft was to observe the collision from a distance and send images back to Earth.

In the image below, you can see the asteroid Didymos (in the foreground) and Dimoprhos completely covered in impact debris. 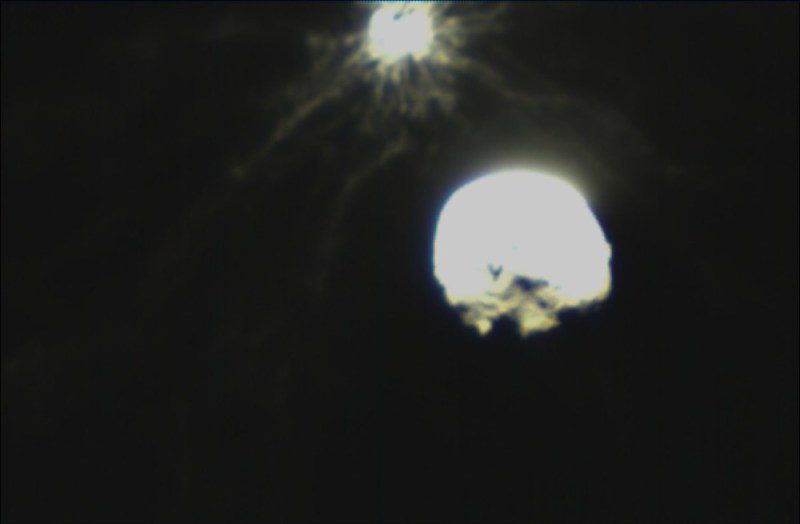 The main objective of the mission is Slight adjustment in the orbit of Dimorphos (160 meters in diameter) around Didymus (780 meters).

In the coming weeks, NASA will assess whether this goal has already been achieved. If successful, this method could be used in the future to deflect potential asteroids off a collision course with Earth.

New images of this collision are expected to be released in the coming days, including photos of Hubble and James Webb telescopes. They will help astronomers understand the structure and composition of Dimorphos.

A replay of the effect – filmed by DART itself – can be seen in the video below: