It was just an experience. Show what the climate will look like in the middle of this century in the UK based on projections from climate models that the planet will continue to warm. At the time, the Met Office, the official British weather service, Produce a fictional weather forecast for 2050 with a severe heatwave in the UK that reaches 40°C in Englanda sign that has not yet been reached.

But the forecasts forecast by meteorologists at the Met Office for 2050, of what the temperature will be in the future, could come true as early as 2022, on Mondays and Tuesdays. For the first time, the Met Office meteorologists have issued a red alert for the exceptional heat and also for the first time have forecast a maximum temperature of 40 degrees Celsius or more in England.

In 2020, . was released @office met It released the default weather forecast for 23 July 2050 based on the UK climate forecast.

Today, forecasts for Tuesday are shockingly nearly identical in large parts of the country. pic.twitter.com/U5hQhZwoTi

An atmospheric scientist at Columbia University in New York noticed the startling coincidence between forecasts for 2050 and predictions for the start of the week. “Today’s forecast on Tuesday is surprisingly nearly identical in large parts of the country,” Simon Lee wrote on social media. In a previous post, he described: “What is coming on Tuesday gives a vision for the future.”

One Heat bubble that has been responsible for at least a thousand deaths from warming temperatures in Spain and Portugal is advancing north and will be over the UK at the start of the week. In doing so, the temperature will reach 15-20°C above normal for this time of year in England with unprecedented temperatures of 40°C in the region. The official UK temperature record is 38.7°C, observed at the Cambridge Botanic Gardens in 2019.

The British remember the extremely hot summer of 1976 with many days of high temperatures and well above historical standards, but all the data indicate that this heat wave will be much worse than any day in 1976. British meteorologist Scott Duncan did not hide his words. When comparing between 1976 and 2022.

“We haven’t seen anything like it. We can’t compare the impending heat emergency to the summer of 1976. A warmer world, thanks to human-induced climate change, is making it easier to push the limits of extreme heat. We continue to see this all over the planet and not just in Europe,” he wrote in a comparison of the global temperature of 1976 with that of 2022.

Expected temperatures for Tuesday in the UK are 4°C higher than any day in the 70s and 80s, well above the highs of 1976. 1976 was in statistics the second hottest summer in England, but the highest mark that summer was 35.9 Celsius. Now, the forecast is 40 degrees Celsius. The following maps, by Dan Holley, show the difference in the extent and intensity of the 1976 heat and the highest temperature recorded in the past 60 years with what is now expected early next week. 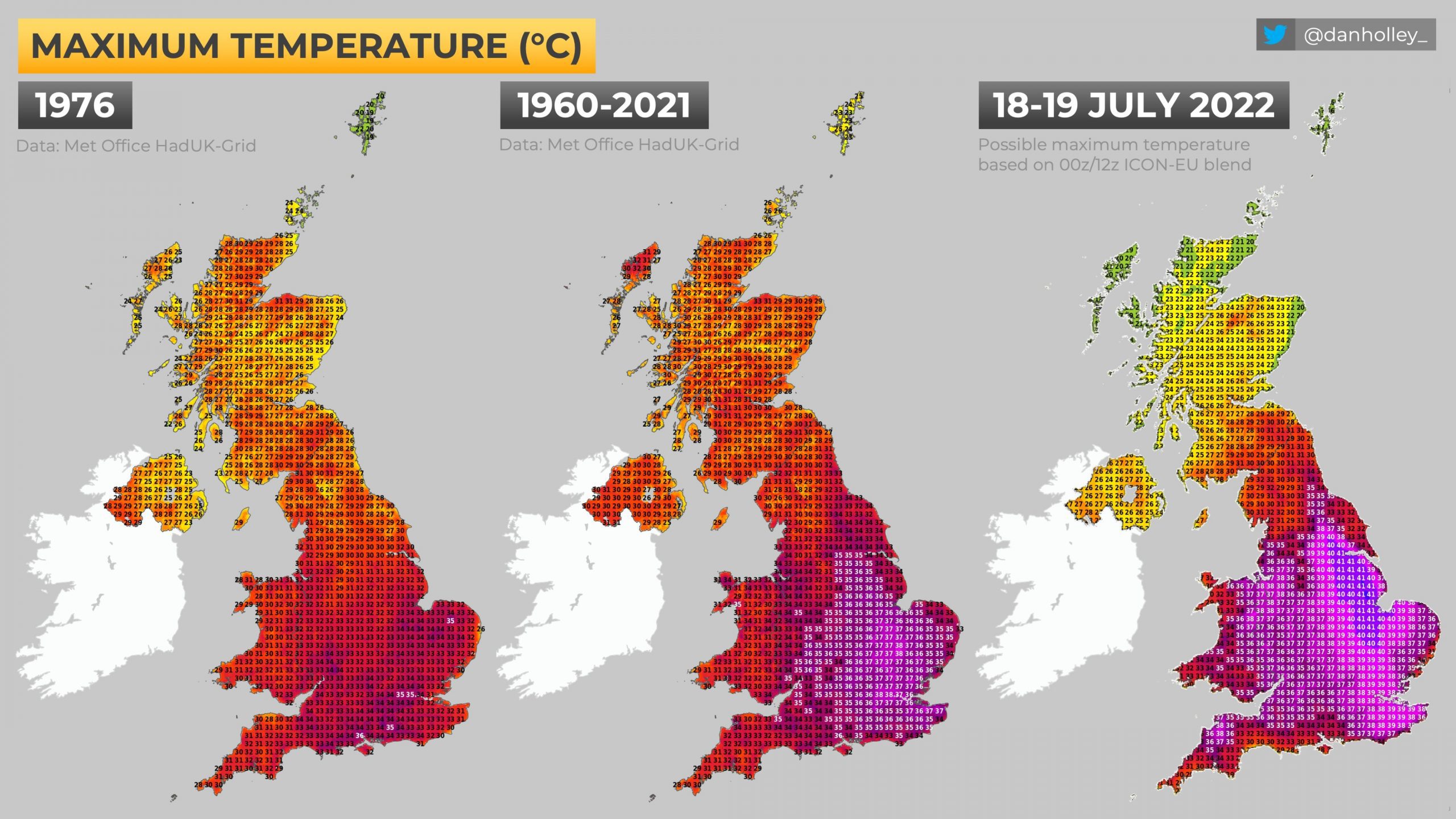 A climate study published in Nature in 2020 titled “Increasing probability of higher temperatures from 30 to 40°C in the UK,” highlighted that “As heat waves intensify in Europe, so does summer in the United Kingdom (UK).” The work shows “how human influence increases the probability of exceeding 30°C, 35°C, and 40°C locally.”

The researchers found that temperatures above 35°C are becoming increasingly common in the southeast UK and that by 2100 many areas in the north are likely to exceed 30°C at least once every decade. They concluded that “summers with days above 40°C somewhere in the UK have a recovery time of 100 to 300 years at present, but without mitigation of greenhouse gas emissions, this could drop to 3.5 years.” by the year 2100.

Meteorologists and doctors in the UK have warned that the heat bubble hitting Western Europe could kill thousands of people. Health officials fear that people living alone on the top floors of buildings are among those who could die, as happened in Paris in 2003. Last year, two bouts of mild heat killed about 1,600 more people, according to official figures.

The level 4 heat warning announced by the UK Health Safety Agency (UKHSA) for Monday and Tuesday means “illness and death can occur among fit and healthy people, not just in high-risk groups”. The Met Office described heat forecasts from France and Spain as “absolutely unprecedented” and urged people to treat it as a storm warning and consider changing plans. 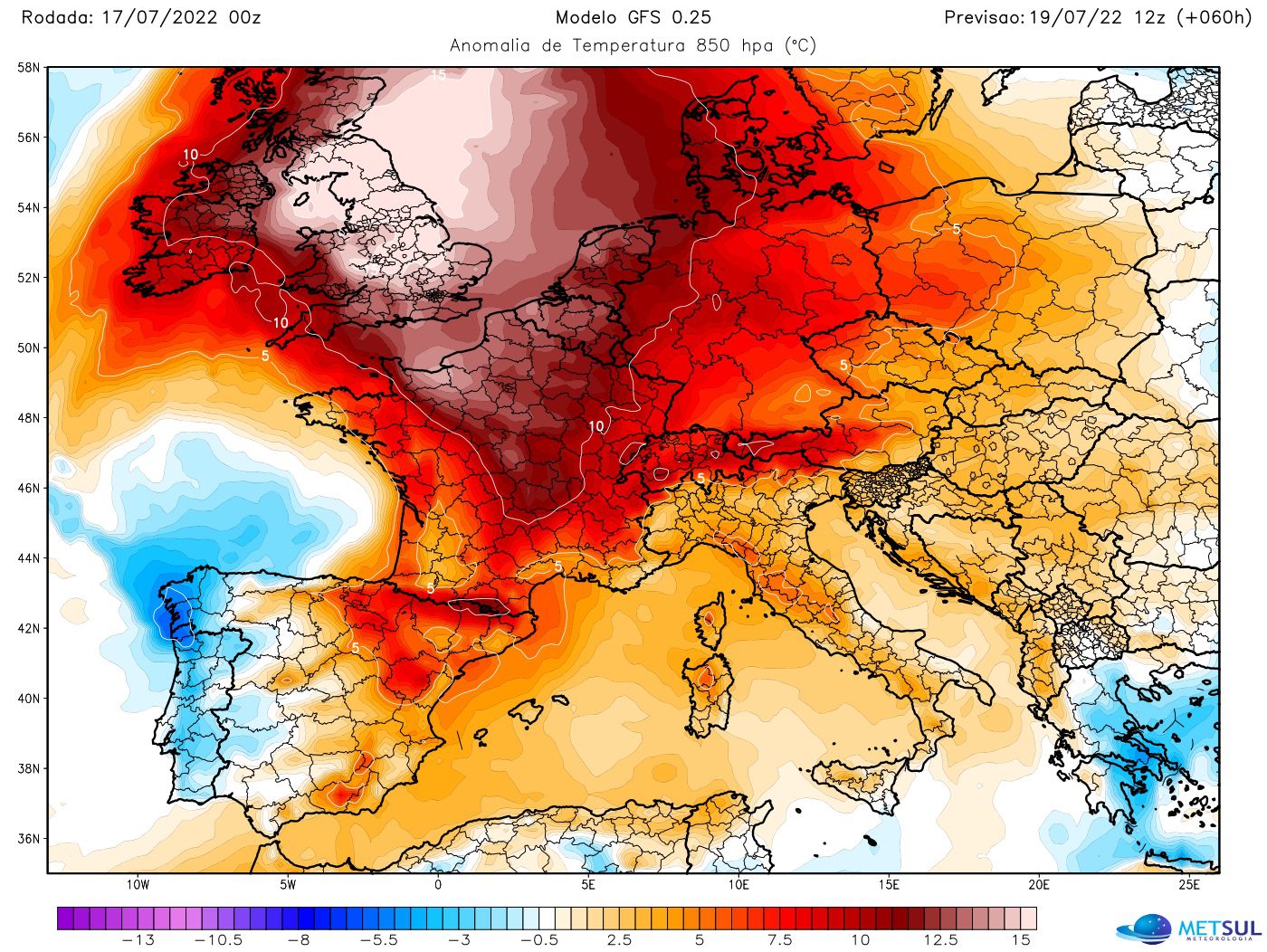 Operations are being canceled in parts of the NHS (SUS in the UK), some schools are closing early or shutting down completely, and Network Rail has advised people not to use trains that will be slowed amid concerns the tracks will curve in the sweltering heat. Record night temperatures in London and parts of the northwest are also expected to exceed 25 degrees Celsius, putting more strain on people’s bodies for longer, and a major factor in the higher death rate.

“We can only see 1,500 to 2,000 deaths in this heat period,” Bob Ward, director of policy at the Grantham Institute for Climate Change and Environmental Research, told the Guardian. The warnings prompted the UK to declare a sweltering national emergency. The British government’s Cobra Emergency Committee met on Thursday to discuss the heat wave.

“There are a number of contingency plans in place,” a Downing Street government spokesman said. This included speed restrictions on rail services, measures to ensure the safety of people who may have to queue in cars on roads or in ports, and more hospital emergency personnel on duty.

Also speaking to the English newspaper, Professor Kevin McConway, Emeritus Professor of Applied Statistics at The Open University, said, “Given the many warnings about approaching high temperatures, individuals and businesses are taking more precautions than they normally would in a heat wave.” According to him, this “could reduce the number of excess deaths. I hope it will happen, but I’m afraid there is still a large-scale excess of death”, he thought.