All Brazilian politicians – especially those on the left – need to pay attention to what is happening in Argentina, where unconventional economic policies and constant postponement of resolving structural problems in the economy are pushing the country once again to the brink of collapse.

Hope has been dashed that a new deal with the International Monetary Fund – negotiated with difficulty – could bring peace to our neighbors within days. The country’s political crisis has worsened, with fierce disagreements within the ruling bloc, populist extremism and growing dissatisfaction among voters.

The free dollar, which is traded on the parallel market, has risen more than 33% since the beginning of the month. The rate was 337 pesos this afternoon, bringing the spread to 160% relative to the official exchange rate of 130 pesos. It’s the biggest disparity between quotes in 40 years.

Fearing new restrictions on the purchase of US currency, Argentines rush to exchange offices and buy what they can. It is a way to defend themselves against the loss of purchasing power of their currency, which has been eroded by uncontrolled inflation.

In a situation reminiscent of Brazil in the 1980s, the cap on the exchange value makes goods whose prices are not controlled by the government more expensive. There is then a new wave of pressure, a rise that takes on a life of its own, shaken by indicators.

Economists are already trading in WhatsApp groups with the graph of the sudden rise of the dollar and a comparison with the crisis of 1989, which led the country to hyperinflation: the path is identical.

While postponing the adjustment of public accounts and controlling inflation, President Alberto Fernandez, with his popularity already below Patagonia, is giving more populism, compounding freezes and historically ineffective measures.

Without the dollars, the factories stop because they can’t import the inputs. And in an oil-rich country, there is a shortage of diesel for agricultural machinery. These are just some of the effects of exchange rates and price controls.

For Brazil, the latest Argentine dive is a wake-up call – and the old joke about the “Orloff Effect” sounds so menacing: “Am I you tomorrow?”

The Brazilian economy has clear differences with respect to Argentina. First of all, Brazil has put an end to the external debt crisis and has international reserves of 360 billion US dollars. Our inflation is above target, but nothing is too different from what is happening in the vast majority of countries. (It’s not an anomaly, like the one that plagues our Argentinian brothers.)

But the next Brazilian government will receive a broken state. The country’s main fiscal pillar, the spending cap, has been undermined by temporary economic institutions that have opened spending gaps to increase spending beyond what was originally allowed. The last one was PEC Kamikaze, With an estimated impact of R$80 billion/year to the public treasury – as nobody thinks the next government will have cojones to withdraw interest. Moreover, the country has a past of addiction to inflation. At the slightest relapse, price increases return with force.

New populist measures, such as reversing labor reform, questioning privatization, and ignoring fiscal discipline, are sure to spoil the business environment and put us on the Argentine path — first gradually and then suddenly. (This paragraph has the correct name and address.)

In Argentina, the trigger for the rise of the dollar blueAs they call parallel, it gained momentum after Economy Minister Martin Guzman resigned earlier this month. Until the beginning of June, the premium for the official was “only” 70%. Details: Until the end of 2019, before Fernandes took office, prices followed side by side, without major differences.

Responsible for negotiating an agreement with the IMF, Guzmán was torpedoed day and night by Kirchners who were against following the fund’s recommendations. 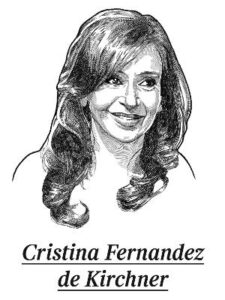 “Cristina has diabolical competence in the activity of the systematic demolition of ministers who are her enemies and a dramatic inability to provide solutions,” said economist Fabio Giampiaghi, a deep expert on Argentine political intricacies.

The new economy minister is not orthodox – by the way! Silvina Patakis, who has the support of Vice President Christina Kirchner. The “Greek”, as Patakis is known, did not explain how it would counter inflation and restore the credibility of the country’s finances. When in doubt, Argentines turn to the dollar.

In 12 months, inflation was 64%, with an upward slope. The basis, which measures the variance in prices least subject to government intervention, remains around 100%.

“Without a rapid adjustment to the overall framework, the risk of inflation converging to triple digits increases,” JPMorgan analysts wrote in a recent report.

In Itai’s assessment, financial deterioration and economic policy uncertainties confirmed market perceptions regarding the sustainability of public debt. The government is finding it hard to find people interested in acquiring its bonds and, as in Brazil in the past, resorts to debt monetization: financing by the central bank, the buyer of last resort for bonds that no one wants.

Patakis, who was suddenly appointed for lack of names, did not satisfy the ambitions of the Kirchnerians, who had already called the new minister “Guzmanita” in the arcades. They want to renegotiate the agreement with the International Monetary Fund and create a universal basic income whose fiscal cost is 2.5% of GDP. Where will the money come from? Than to raise taxes on exports – the usual way for the state to strengthen its budget.

Rural producers, angry at the already high tax burden and lack of inputs, are not ready to foot that bill anymore. Anti-government protests are increasingly frequent. Only 25% of voters approve of the government.

Alberto Fernandez, celebrated for years as a moderate leftist, holds a knife to his neck. Rumors are growing that he could resign his position, and hand Casa Rosada to his deputy.

Cristina, on the other hand, was not content with stocks in the economy, she led fierce campaigns against the Supreme Court, as did Bolsonaro.

The reason: the large number of corruption cases that burdened the former president. She calls for “urgent reform” of the court, with an increase in the number of judges – of course, to appoint the judges she trusts.

Poor Argentines. They can sail on calmer seas, surfing the appreciation of goods. But they put everything in jeopardy, in the political quagmire of Kirchnerian populism, the alternative resistant to Peronism.

Brazil hasn’t made it there, but the stakes are growing.

If Labor wins, Maelson believes that campaigning “nonsense” such as the Labor Reform Review proposal will not thrive. “But I don’t see Lula as a leader capable of understanding financial drama and low productivity.”

“sprawling” squirrels in the inhabitants of the intrigue of New York; Understand why animals look like this | Globalism

What does a giant chile pit look like inside; look at the pictures