The governor pledged to follow California’s example and require 35% of new cars sold in the state to be electric or hybrid by 2026.

Ban the sale of petrol-powered cars in the state by 2035.

That’s the promise of Washington Governor Jay Inslee in the US this week.

Using Twitter, Inslee said on Wednesday, August 24, 2022, that by the end of the year his state will adopt the same rules as California, requiring 35% of new cars sold in the state to be electric or hybrid. Until 2026.

This is an important milestone in the climate fight, Inslee wrote on social media. “We look forward to partnering with California and the Biden administration to rapidly eliminate our nation’s #1 GHG emitter.“, he said.

Falk told reporters that the state Department of Ecology will handle the regulatory process. “Public consultations will begin in September,” Falk said. 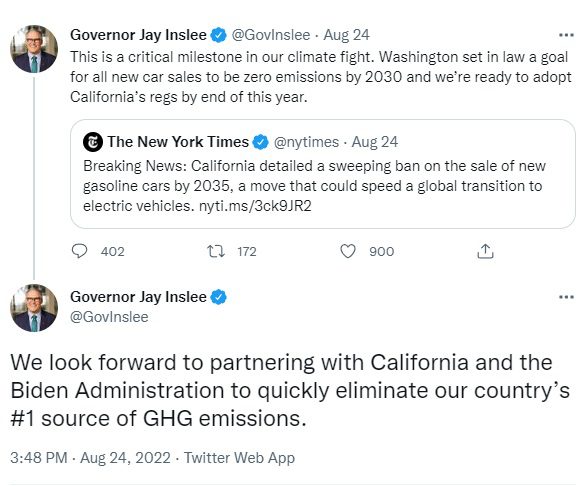 The move by US state governments was prompted by a pledge by six major automakers to stop selling gasoline and diesel-powered cars globally by 2040.

Ford, General Motors, Mercedes-Benz, Volvo and Jaguar Land Rover signed the pledge at the UN Climate Change Conference in November 2021. They were followed by 30 countries and personal transportation apps like Uber. The deal includes a freeze on sales in key markets until 2035.

Many analysts have pointed out the implications of this shift in technologies, abandoning fossil fuels. On the one hand, if the environmental results justify it, on the other hand, it is necessary to assess the large investments to be made in the development of the supply chain and infrastructure.

According to the US website Big Country News, Washington ranks third among US states for the total number of electric vehicles in December 2021 with more than 68,000 electric vehicles. Now this number has risen to around 2.8 million vehicles registered in the state.

Alexandre Peleki is a journalist specializing in transport