A picture has been revealed What does Sagittarius A*, a “black hole” look like In the center of the Milky Way. But what does science know about black holes? Is it possible to go back in time by getting into one, as shown in films like Interstellar (2014) and Planet of the Apes (2001)?

Who answers some of these questions in an interview with g 1 Daniel Vanzilla, professor at the São Carlos Institute of Physics (USP) and author of Black Holes: Breaking the Limits of Imagination (Editora Unesp). see below:

What is a black hole? How did he do?

What is a black hole?

A black hole is the name given to a region of space that has an extremely strong gravitational pull Nothing, not even light – the fastest thing in the universe – can escape it.

A black hole forms when mass/energy (which according to Theory of relativity, are the same, only measured in different units) concentrated in a small enough area – how small it is depends on the amount of mass/energy. For example, if we took the entire mass of the planet Earth, we would have to focus it on the size of a marble to generate a black hole.

The mass of our Sun must be concentrated within a radius of 3 km to form a black hole.

But how can collective pressure occur at these levels? While any amount of mass could, in theory, give rise to a black hole—if crammed into a small enough region—only stars with masses multiple times pass our sun, at the end of their life cycles, through natural mechanisms as Their nuclei are compressed so violently that they lead to the appearance of black holes.

Thus, black holes with masses less than a few solar masses are not expected to exist in nature – but there is no limit to how massive a black hole can be, because once it forms in this astrophysical context, it only increases in mass. They “eat” matter from nearby stars and gases.

What is inside a black hole?

It must be remembered that a black hole is the name given to the region from which nothing can escape; Most of this area is actually empty, completely empty.

The matter that formed the black hole, when compressed to the volume needed to form the hole, ends up collapsing indefinitely until it occupies a theoretically empty volume, resulting in what is called a black hole. Singularities.

But it is worth noting that the behavior of the region inside black holes is still the subject of scientific research. Although we have a theory that provides a description of this inner region – excluding singularities – (the same theory that predicts the existence of black holes: general relativity), the conditions predicted by this theory are so severe that we cannot be sure that the theory itself does not change under some These conditions (as expected do not apply to singularities).

And since it is impossible to get information from inside black holes – unless we dive into one, but we will not be able to communicate our results to those who remain outside – it seems that we have to continue to consider this question from the perspective of our known theories.

Is it possible to enter a black hole?

Yes, getting into a black hole is easy: just walk towards it or get close enough to attract you to the black hole.

Remember that a black hole is a region, not a physical object, so it is constrained by a non-physical theoretical boundary – the “event horizon” – that it can cross without realizing it. But depending on the mass (or size) of the black hole, the macroscopic object can rupture even before it reaches the event horizon, in which case its components will be the ones entering the hole.

Can you ‘time travel’ inside a black hole? What is exclusivity?

According to our best understanding of these things (provided by general relativity), nothing suggests that they can be used for time travel. The most likely scenario for something falling into a black hole is that it ends up being destroyed and incorporated into the singularity, or, in a purely optimistic scenario, that its components end up in “another universe” – or, more appropriately, our own region. Our universe may only be accessible through the inner part of a black hole. (But it should be noted that this last possibility is highly speculative and that there are strong theoretical reasons to discredit it.) 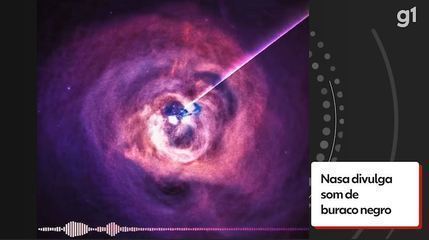 NASA launches the sound of a black hole

As for singularities, as mentioned above, they are “regions” within black holes where all (or all) of the matter that formed (or fell) the black hole will be concentrated. According to general relativity, it would be like the “edge” of space-time, the “end of the line” for having anything to address it.

However, there is a belief shared by most of the scientific community that these singularities will be best described/explained by a theory that integrates principles of relativity with those of quantum theory; Perhaps they cease to be real individuals and are understood as structures with their own laws and properties. But the search for a theory that does this has been going on for nearly a century, with no concrete results yet.

What we need to know: What mysteries do we still need to unravel, such as what happens on the event horizon, for example?

The biggest mystery when it comes to black holes is the singularity within them – as explained above. We understand very well what happens at their boundary (the event horizon), meaning that general relativity has no problem describing these regions. Unfortunately, the secret of the singularities is so well protected by the most perfect “guardian” that there is no way, being outside the black hole, we have the slightest glimpse of what is going on inside.