Blocking screenshots, so-called “prints”, in single-view messages for photos and videos has also been added to the platform.

Messaging app The WhatsApp This Tuesday announced 9 new features that have been added to the platform. The changes to the test have already been since the beginning of last month. It will now be possible to hide the “Online” flag that appears on users when they access the app. Another feature, which users have already suggested, is the possibility to leave a group without any kind of notification, a kind of “French” exit. From now on, the notification that someone has left the group chat will only be sent to the group admins. Another new feature is the prevention of screenshots, so-called “prints”, in single-view messages for photos and videos. The procedure provides another layer of security for users who want to share instant content that is not stored or available to senders. The new functionality will be released gradually to all users until the end of the month. All changes will be made automatically by updating the application. However, to remove the status from “Connected”, it is necessary to configure the device. Previously, the warning was shown for all contacts, but now it is possible to restrict who can check the status and who cannot. See below for instructions to activate this new feature: 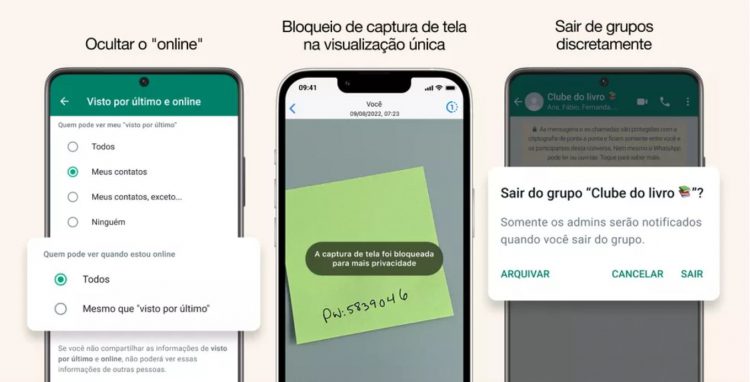 New features of the app were revealed on Tuesday 9