Although William Ribeiro made an indirect appearance for the first time on Wednesday after that He attacked referee Rodrigo Crivelaro In the second division match Rio Grande do Sul last second night.

The midfielder’s defense stated, through a note sent to the press signed by lawyer Jose Felipe Luca, that William “You did not risk or intend to kill” the judge (read full below).

The referee was attacked during an Access Division match at RS – Photo: FGF TV / Reprodução

Justification relates to Reason for arrestThat happened on the day of the incident, but it was cancel – rescind In an injunction from Justice on Tuesday.

The text states that the temporary freedom granted to the player must not be revoked due to lack of items. Luca is waiting for the investigation to be completed by the civil police before starting defense proceedings and says that William is available to the court to provide clarifications.

+ Referee beaten out of hospital: ‘It was just intimidation’

“The technical defense of Mr. William Cavaleiro Ribeiro, through this press release, makes it clear that the player never took any risks and did not plan to kill referee Rodrigo Crivelaro Dias da Costa.

With regard to the preservation of the liberty of player William Cavalero Ribeiro, the defense in its convictions that the Court of Justice and the District Judge of Financio Aires/Res.

Therefore, the defense is waiting for the presentation of the indictment by the Public Prosecution to start an effective defense regarding the facts that will be held by the ministerial body.

Finally, Sir William Cavalero Ribeiro makes himself at the disposal of the court to clarify the facts, as well as to undertake to attend all judicial proceedings which may be necessary to resolve the case.”

William Ribeiro, 30, attacked referee Rodrigo Crivelaro during the match between Guarani, of Venancio Aires, and Sao Paulo, of Rio Grande, in Venancio Aires, during a Serie A 2 match in Gaucho. The judge was unconscious and had to take him to the hospital, where he was released the next morning.

After the episode, São Paulo announced the termination of the contract with the athlete. The president of the Rio Grande club claims that William Ribeiro did not cause any problems and that he was seen as one of the leaders of the cast. 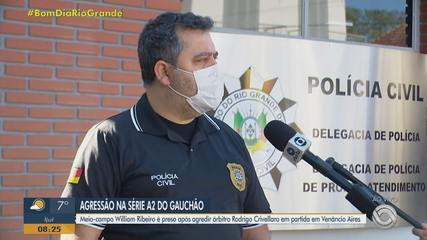 According to delegate Vinicius Lourenço, the player has a criminal record for Bodily injury, threats and incitement to riotin 2009 and 2021. The report was unable to confirm whether he was in any way convicted.

William Ribeiro was released on probation and left prison early Tuesday night. The Civil Police will have 10 days to complete the investigation and refer it to the Public Prosecution.

The 30-year-old midfielder is from Pelotas and has spent most of his football career in Rio Grande do Sul. He started his career as a player in the Inter youth categories. Soon, he toured several clubs, such as Brasil de Pelotas, Ypiranga, Guarani-VA, Avenida, Esportivo and Veranópolis, among others.