The creation of a land corridor between Creamera and Donbass and Ukraine’s loss of access to the Black Sea are the two main goals of the Russians; The United States and Moldova express concern about the escalation of the conflict

Photograph: Gleb Garanish/ReutersStatue of communist leader Lenin in front of the parliament building in Tiraspol, in the breakaway region of Transnistria in Moldova

On Friday, November 22, the Commander of the Central Military District Forces received RussiaRustam Minnikhanov mentioned that in addition to Donbassseparatists, The Russians are also interested in controlling southern Ukraine, which makes it possible to form a corridor into Transnistria, a pro-Russian breakaway republic in eastern Ukraine. Moldova. The Kremlin It has not yet commented on this information, however, since the announcement, the Moldovan government has expressed deep concern and has seen the site become the target of attacks, such as the attack on Wednesday, 27, which hit a radio station. and safety.

Officials in the pro-Russian separatist region announced the shooting of a village on the border with Ukraine. “At night, several drones were seen over the village of Kubasna,” the Transnistrian Interior Ministry said in an official statement. The text continues: “Shots were recorded from Ukraine, but no injuries were reported.” Located two kilometers from the border with the Eastern European country, the village houses a large warehouse of Soviet-era weapons under the control of Russian soldiers deployed in that area. The possibility of forming a land route and taking control of southern Ukraine would make it impossible for Ukrainians to reach the Black Sea – at the beginning of the conflict, the Russians tried to gain control of the Odessa and Mykolaiv region in the south of the country. Country.

Moldova is one of the countries that belongs to Soviet Union And it became an independent country after the fall of the bloc. However, in the early 1990s, there was a conflict between the newly independent Republic of Moldova and the separatists from Transnistria – which comprises a narrow strip of land of about 3,490 km, located between Ukraine and the rest of the country – which wanted to remain in contact with Russia. Thus, in 1992, the region seceded from Moldova after a brief two-year civil war.

Despite having its own constitution, army, currency, and flag, Transnistria was never recognized by the international community, not even Russia, which intervened to support secession. Currently, its population of about 500,000 is highly dependent on the Russian government, which provides free gas and 1,500 soldiers are deployed in this region. Moldovans do not attach much importance to this region and classify it as “the end of the world stuck in the Soviet era”, where statues of Lenin still stand. There, international cards cannot be used and only one company, called Sharif, controls practically everything. 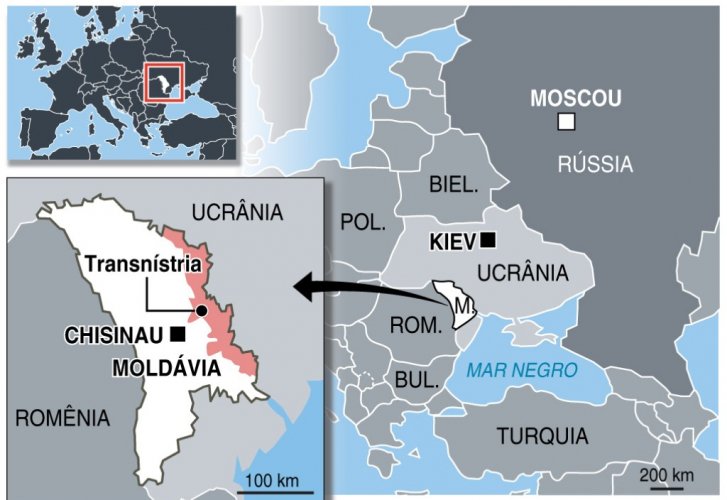 The desire of General Rustam Minnikhanov to establish ground contact with Transnistria aroused worldwide concern, such interests have been repeated for years on the Russian side, which uses this argument for Invasion of other locations that were part of the Soviet Union, such as Georgia and Ukraine. The Kremlin, Moldova and we Demonstrate concerns about an escalation of conflict in this region. In a press conference, Moldovan President Maya Sandu stated that “from the information we have at the moment, these attempts come to escalate the situation from the factions within the Transnistrian region that are pro-war forces and are interested in destabilizing the situation in the region.” As soon as the conflict erupted in Ukraine, Moldova applied to join the European Union. However, Transnistrian leaders said they did not have the same intention and demanded the creation of two independent states.

Ukraine also accuses the Russians of trying to drag the breakaway region of Transnistria into the middle of their war against it Kyiv. US Secretary of State Anthony Blinken traveled to Moldova shortly after the conflict began as part of a show of support for both the country’s sovereignty and its efforts to receive refugees. State Department spokesman Ned Price expressed concern about the bombings, but reiterated “the Moldovan government’s call for calm in response to these incidents, and we fully support Moldova’s territorial integrity and sovereignty.” Americans are watching developments. If General Minnikhanov’s information is confirmed, it will be clear that Russian President Vladimir Putin has much greater ambitions than the liberation of Donbass. Ukrainian Defense Minister Oleksiy Reznikov took a stand on Minnikhanov’s testimony. “They stopped hiding,” he said on Twitter, referring to Russia and its true intentions in the conflict with Ukraine.