first training brazil national team In Turin, Italy, it will not be Neymar and Marquinhos. This activity is scheduled for 16:00 local time (12:00 Brasilia time) and will be the first in Brazil’s preparation for the World Cup. In all, 24 of the 26 called up by coach Tite have already performed.

The flight was delayed with the Paris Saint-Germain players, there was a change of plane, and both are scheduled to arrive, according to the advice of the Brazilian Football Confederation, while working at Juventus CT.

The exact reason for the takeoff delay has not been officially announced. With the setback in Paris, Neymar and Marquinhos will be the only ones who will not arrive in time for training.

Among those working in Europe, Alex Sandro, Danilo, Bremer, Ravenha, Rodrygo and Dani Alves are also in focus. The mass that came from England arrived together at the end of the morning and completed the wave of shows. Pedro, Everton Ribeiro and Weverton arrived yesterday (13), along with the coaching staff, on a flight from Rio.

According to the planning of the technical committee, the first training sessions for Brazil in Italy will be to try to balance the physical condition of the players, while controlling the activity load. The expectation is that the most intense work, with all 26 recalls, will occur on Wednesday.

Meanwhile, at the hotel door

A group of 40 to 50 fans was at the door of the Juventus hotel, where the Brazilian national team will be concentrated over the next few days. They were waiting for the players to arrive with posters and cartoons. 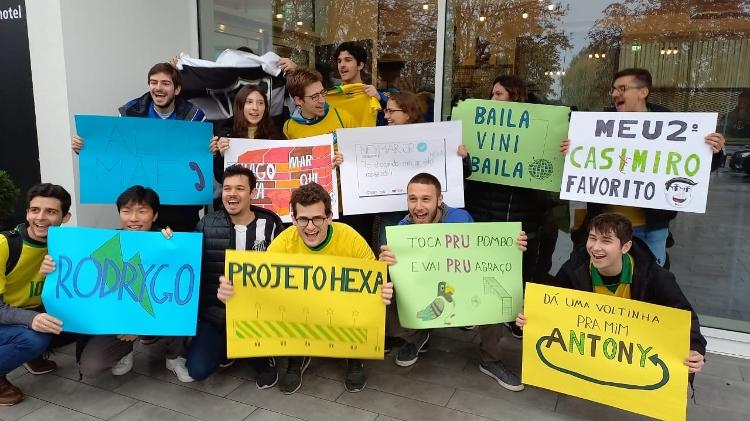 There were messages in honor of Neymar, Richarlison, Vinnie Jr., Gabriel Jesus, Anthony, Rodrygo, Marquinhos, Thiago Silva and Casemiro. According to the fans, most of the young Brazilian exchange students did not have the “time” to do this to the other players on the team because the work was done well. There were even drawings of pigeons, a party globe and drawings of Casemiro’s streamer, roughly the same name for the national team’s steering wheel.

Richarlison was the one who made the most of the crowd. He patiently took pictures and inspired cheers of support from those who came to accompany the arrival of those called up to the World Cup.

“The arithmetic is very simple”; David Luiz sends Real Madrid to Neymar on the web in the middle of the World Cup and the message reaches Flamengo

“He wants to leave São Paulo”; Xodó de Ceni is free to play in Flamengo