The BepiColombo spacecraft has finally arrived at Mercury, the closest planet to the Sun, and has sent back its first images. The images were taken as the spacecraft passed through the night side of the planet, but they are still great images from an unprecedented mission. Also, other images of the universe filled our eyes during the week.

We also learned about the next steps of the UAE space programme, tests of a Brazilian rocket engine, good news coming straight from Mars and discoveries about the moon made using samples collected by the Chinese Chang’e 5 mission.

Check out this and other news that “bombed” last week!

The BepiColombo spacecraft, carrying scientific instruments from the European Space Agency (ESA) and Japan’s JAXA, has arrived at Mercury, after three years of travel. She flew over the planet for her first close, and of course her first photoshoot.

Although the images are in black and white, it is possible to identify some large known craters that smash into the surface of the first and smallest planets in the solar system. The ship was passing through the night side of the planet, so there was not much light on the surface, but pictures with good resolution already give a “taste” of what is to come.

This is the Arp 91 system, also known as KPG 468, and it’s a much sought after object by those who work with astrophotos because it’s two colliding galaxies, each at a different angle. This composition in our opinion is very interesting, because it allows us to observe very well how the matter of galaxies behaves during the merging process.

The new Arp 91 image is the result of a series of collected data, including images from Hubble and Victor M. The object could be a glimpse of what our galaxy, the Milky Way, might look like when it collides with its neighbor, Andromeda.

The UAE, which sent a mission to Mars in 2020, announced its next step in the world of space exploration: a mission to study the main asteroid belt of the solar system, located between the orbits of Mars and Jupiter.

The mission doesn’t have a specific name yet, but it does have a clear goal: to accelerate the development of local initiatives based on the nation’s knowledge. The new spacecraft will be five times more complex than the Hope Mars and is expected to be in 2028, and is expected to reach its destination in 2030.

How can two planets, such as Earth and Venus, be similar in size and mass, yet differ in climatic and atmospheric conditions? A new study suggests that space rocks that would have hit both planets during their formation may be ‘to blame’.

In fact, these rocks would be protoplanets the size of Mars that would eventually collide with Earth and Venus. Through simulations, scientists have found that it is possible that half of these protoplanets did not reach Earth but passed close enough to slow their speed. Then they hit the flower. In other words, our neighboring planet will be more hostile to life as it “hit” more in its bud. 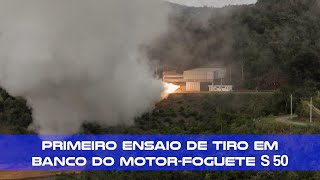 The first test of the S50 rocket engine took place, a national project that will help advance the development of surface-to-surface missiles and launch small satellites. During the test, the engine was suspended on a large concrete block and ran for about 84 seconds.

During this time, the sensors collected data about the performance of the engine, which will be important to check pressure, vibration, engine temperature and many other factors essential to the proper operation of the rocket. The S50 is the largest rocket engine ever produced in the Southern Hemisphere and uses solid fuel, as well as adopting the use of carbon fiber in the engine casing. 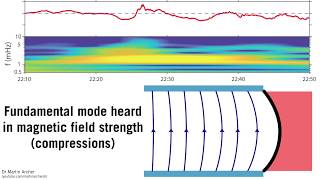 Earth uses the magnetosphere to protect itself from charged particles in the solar wind, but astronomers are still beginning to understand exactly how these processes work. Previously, they determined that magnetic field waves behave like a cylinder when the solar wind hits them, but what happens is something different.

According to a new study, surface waves (that is, those at the “edges” of the magnetic field) that form head forward away from charged particles, and then move backward between Earth’s magnetic poles. Moreover, when the motion slows down, the standing waves persist for some time, which leads to potential effects on the radiation and aurora belts.

A Soyuz MS-19 rocket with three Russian crew members on board was launched at 4:55 a.m. ET today to the station under a clear blue sky in Kazakhstan. more… https://t.co/DIpFPGawCs pic.twitter.com/gcbnXzgrHf

The Soyuz MS-19 mission arrived at the International Space Station with three lab crew members, including actress Yulia Peresild and director Klim Shipenko. They are there for the filming of “The Challenge on the Orbital Station,” while the third passenger, veteran astronaut Anton Shkaplerov, will stay at the station for six months.

Pyotr Dubrov and Oleg Novitsky, the two cosmonauts who were aboard the International Space Station, will be taking a break from their activities to catch a quick look at the photography. The film tells the story of a Russian cosmonaut who suffers a heart attack while walking in space and will have to undergo emergency surgery before returning to Earth. All this will also be a test for Russia’s Roscosmos agency to see if it can prepare ordinary citizens to fly in just two or three months.

Survey results of samples from China’s Chang’e 5 mission, which brought about 1.7 kg of material to Earth from the moon last year, revealed that these moon rocks are approximately 1.97 billion years old. Moreover, there is evidence that volcanic activity on the Moon lasted longer than previously thought.

If this information is correct, the rocks are a billion years younger than the volcanic samples collected during the Apollo and Luna missions. NASA and the Soviet Union, respectively. This means that there have been active volcanoes on the Moon only 2 billion years ago, which is not very long on a cosmic scale. This discovery will be important to understanding how the moon was formed.

If the scenario depicting Mars with lakes in the ancient past is just a hypothesis, the confirmation may have been delivered by the Perseverance Chariot, which is exploring the Jezero crater. Is this a new study analyzing data sent by robotic vehicle instruments, which determined that Jezero is, in fact, what’s left of the riverbed that used to be there.

To reach this conclusion, the scientists looked at different layers on the slopes that indicate that slow-flowing water fed the delta, first and foremost altered by severe flooding that left boulders up to 1.5 meters long in the crater. Therefore, the water should flow from 6 to 30 km / h inside the lake with a diameter of 45 km.

It now remains to wait for new analyzes to see if life, at the time, did manage to thrive in the lakes and rivers of Mars.

Research confirms: optimism pays off, and makes you live longer

6 behaviors that are slowly destroying your relationship