Emmanuel Macron, Mario Draghi, Olaf Schulz.. Who can succeed Angela Merkel at the presidency of the European Union, after the chancellor retires after 16 years in power?

The race for this position begins in 2022, but according to analysts, in the end, it is likely that no one, at the moment, will have the ability to face the deep problems that the European Union is going through on their own: since then the weakening of the rule of law in some member states to the risk of geopolitical marginalization and the setbacks of Britain’s exit from the European Union.

Angela Merkel, who will be officially replaced in the German government in December by Social Democrat Olaf Schulz, has made history in Europe with her efforts to hold the European Union together, despite the long and multiple crises.

Merkel “is seen as the ‘de facto’ leader of the European Union, as well as the leader of the free world,” Sebastian Reich, a professor at IESE Business School at the University of Navarre, Spain, says in a blog post.

A recent poll by the European Council on Foreign Relations (ECFR) think tank showed that if they could, 41% of Europeans would support Angela Merkel as Europe’s president, compared to only 14% who would choose French President Emmanuel Macron, the other figure mentioned in the poll.

However, he still had a chance to fill this position. The first stage will be the six-month EU presidency, which France will take over in January.

Merkel’s departure “may allow the French vision of a strong Europe to develop. Something Macron has championed since coming to power,” explains Alexandre Robinet-Borgomanno, in a text published by the French analytical center Institut Montaigne.

“It’s the President Macron who has the initiative to “restore European leadership”, although his stated attempts to give the EU a clear political objective have so far been thwarted.Helen Thompson, a professor at the University of Cambridge, opens up in a recent article in the New York Times.

Mario Draghi awaits the start of a meeting of the European Parliament’s Committee on Economic and Monetary Affairs in Brussels, in 2016 – Photo: Reuters

In this sense, the Franco-Italian treaty Macron just signed with Mario Draghi – a key figure in the new European post-Brexit alliances – did not go unnoticed.

And even more, when the Italian prime minister, nicknamed “Super Mario” for his performance at the helm of the European Central Bank, is seen as a potential candidate for European leadership.

Returning to stability back home, along with strong personal ties with his European partners […], are excellent references for reasserting Italy’s presence in the European scenario,” says Nicoletta Pierusi, of the Istituto Affari Internazionali Research Center in Rome, in the journal Internationale Politik.

However, Draghi’s popularity could be “transient, because he was born in the economic crisis caused by the health emergency” of Covid-19, adds Perozzi.

For his part, Macron faces a far from simple 2022 at home, with a presidential election in April, the outcome of which is highly uncertain due to the rise of the far right.

This may make France focus more on its domestic political problems rather than trying to develop its grand vision for Europe.

“We want to increase the strategic sovereignty of the European Union,” and better defend “common European interests,” stated the coalition agreement of the new government headed by Olaf Scholz.

However, Schulz, who has presented himself as Merkel’s heir after being No. 2 in her government, will have to make a violent cut with some structure to make it happen.

Immediately, with Merkel, diplomacy focused on the constant search for agreements, which prefer to wait before acting in times of crisis, and prioritize economic interests, including those with authoritarian regimes such as Russia and China.

However, this system begins to show its limitations. “Merkel should not survive,” because it does not allow “Europe’s challenges, such as the pandemic, climate change and international geopolitical competition to be resolved,” stress Piotr Borras and Jana Puglierin in an ECFR analysis. 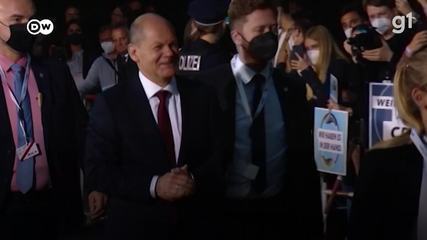 Find out who Olaf Schultz is, who should replace Angela Merkel

In favor of firmer solutions, would Emmanuel Macron be the best?

Macron’s leadership is a choice […] Professor Sebastian Reich warns that this is unlikely “because of its problems in forming ‘necessary alliances’, and moreover, there is a feeling that France wants to use Europe to defend its interests, he believes.

“It has been weakened by the competition between the United States and China, and by a deep internal division […] The EU cannot be run, and nobody can be the new Angela Merkel,” the Cambridge University professor defends.

Indeed, speaking plainly, neither the German chancellor nor the French government can run Europe […] And without leadership, Europe will stagnate,” Thompson notes.

Want to know how to spot a pathological liar? This secret