The COVID-19 epidemic on the continent has worsened in recent weeks, with an increase in new infections, especially among the unvaccinated population. Europe accounted for more than half of the average infections in the world last week, As reported by Reuters news agency.

Austria announces a ban on vaccination against Covid-19

In some states in Germany, stricter restrictions are expected to come into effect on Monday (15) for the unvaccinated, such as a ban on going to bars, restaurants, public swimming pools and other indoor places in part of the country.

The imposition of mandatory vaccination is still avoided, even in the most sensitive occupational sectors.

On Sunday (14) Germany recorded more than 33,000 new cases of coronavirus and It has crossed the 5 million incident mark since the start of the pandemic.

The number of people who have died from complications related to Covid-19 in Germany is 97,700. 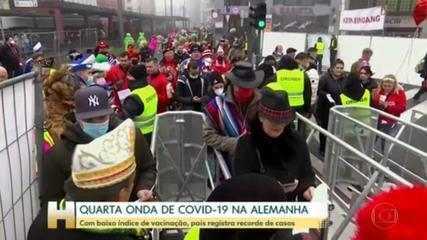 Germany records more than 50,000 new cases of Covid-19 for the first time in the epidemic

On Saturday, German Chancellor Angela Merkel urged those who have not yet been vaccinated to do so. Germany records the proportion of citizens with a total vaccination of 67.5%. The number has stagnated for weeks.

People who have not been vaccinated or who have not recently contracted Covid-19 will have to undergo confinement from Monday (15) in Austria, an unprecedented measure in the European Union.

“The situation is serious. We did not take the measure lightly, but unfortunately it is necessary,” Chancellor Alexander Schallenberg told a news conference in Vienna.

Nearly 65% ​​of the population received two doses of the vaccine in Austria, which is lower than the European average, which is 67%, and far from countries such as Spain (79%) and France (75%).

The Netherlands is back in partial lockdown

The Netherlands again implemented a partial lockdown on Saturday (13). The government has ordered restaurants and stores to close early and has also banned sporting events from being held by the public.

Nonessential stores and even supermarkets will be closed early, and social distancing measures will be imposed again.

In its latest risk assessment, the European Centers for Disease Control (ECDC) declared the epidemiological situation in the European bloc one of a rapid and significant increase in cases and a slow decline in mortality.

With the steady increase in infections since the start of the coldest season on the continent, the picture should change soon. “Cases, hospitalizations and deaths are expected to increase over the next two weeks,” the agency says.

Countries where the situation is very worrying

Countries where the situation is worrying

Plus three European countries that are not part of the bloc:

Watch the most watched videos of g1