2022 is marked with Frequent and intense solar activity. According to government meteorological agencies in the United States and the United Kingdom, in March alone, the Earth took a hit Two separate magnetic storms.

While the event did not cause serious problems, it was enough to put the matter back on the agenda – and rightly so, since severe solar storms It can cause great damage to the technological devices we use in our daily lives. 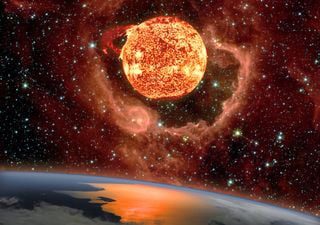 In 1989, for example, a powerful solar storm The power goes out Six million people. the same storm The stock market crashed in Toronto After damaging your computers. And in February of this year, 40 SpaceX Starlink satellites missing After a solar storm kicks them out of orbit.

The truth is that We are still not ready for a strong geomagnetic storm. The global Internet depends on undersea cables whose unshielded repeaters will be easily damaged by the next strong solar storm, which could Disrupts global connectivity for weeks or even months.

Anxiety increases with the appearance of a file The past few weeks have been extraordinarily active. Earlier this month, a new geomagnetic storm hit and caused bright aurora borealis over Canada. A solar flare on Friday caused radio outages in many parts of the world.

And now, predictive models from NASA indicate that The possibility of a strong solar storm hit our planet.

Dr. Tamitha Skova space weather expert, took to social media for Share news with a video of NASA’s prediction model. Skov is a research scientist at Aerospace Corporation and an award-winning educator.

According to the scientist, the models indicate a volcanic eruption that was launched into space in an area capable of causing Direct impact on our planet this Tuesday (19).

However, the magnetic orientation of the solar storm is difficult to predict. If the magnetic field of this storm is directed to the south, it could hit us Category G2 or even G3 (strong) storm.

Some of the possible effects of storms in this category (G3) are:

The sun enters The active phase of your solar cycleSo the trend is, unfortunately, that such incidents will increase in frequency and intensity over the next few months.