Gasoline price started to rise in the middle of last year – and only recently has it begun to show signs of relief in consumers’ pockets.

But where is the fuel price heading now?

Why do prices go down?

While the rally was driven by the resumption of the global economy after the collapse caused by the Covid pandemic, combined with the strong appreciation of the dollar against the real and the effects of the war in Ukraine, The latest decline came mainly on the heels of the product tax cut.

In mid-June, it was Legislation limiting ICMS rates that are imposed on items deemed essential – as such fuelNatural gas, electricity, communications and public transportation.

ICMS is a state tax, makes up the price of most products sold in the state and is responsible for most taxes collected by states.

The same law also sets federal tax rates on gasoline – which, in June, represented about 10% of the price of fuel sold to consumers, according to data from Petrobras.

How are the prices today?

The new law came into force quickly: in the same month, the price of gasoline sold to consumers decreased by 0.72%. And the, In July, the decline was 15.48%.According to the data of the Brazilian Institute of Geography and Statistics (IBGE).

In the 12-month period, after 16 consecutive months with higher numbers, gasoline finally returned to an unremarkable rise last month, 5.64%.

An attempt to attack the systems of the National Petroleum Agency (ANNP), which performs this price survey, however, has left more recent data unavailable. The expectation is that when disclosure resumes, the survey will show a new low – since On Tuesday (16), Petrobras again lowered the price of gasoline sold to distributorsaccompanied by a rise in global oil prices.

Gasoline is cheaper at distributors

How do you go forward?

The price of a liter of gasoline is expected to stabilize – or even continue to fall for some time.

“Our view is that there will be no further increases in the price of gasoline this year,” says lead analysis officer at Warren Investimentos, Frederico Nobre. “It is possible that gasoline will remain at current levels or even decline a bit more through 2022,” he adds.

Andre Braz, economist and coordinator of price indices at Getulio Vargas (FGV), notes that “everything will depend on the pace of the global economy.”

Braz explains that the world is still going through a period of high inflation, which would prompt the central banks of major economies to continue raising interest rates to stop the price hike. This movement is “cooling” the economy, and making it harder for commodities – including oil – to rise.

“For these cheaper raw materials, including oil, the trend is that prices are not rising as strongly or even falling,” says the economist.

He recalls that, in dollars, the price of a barrel has already fallen by about 20%, making way for recent cuts in the price of gasoline sold by Petrobras. And if this trend continues, there are chances of a further decline in petrol and diesel prices. 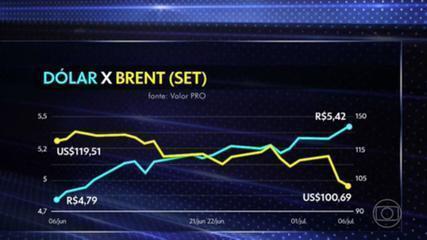 But the economist notes that expectations could be reversed, due to elections scheduled for October, geopolitical conflicts, such as the war in Ukraine and US-China tension over Taiwan.

“Then it will depend exactly how the world behaves. But at this point what I described [a estabilidade ou queda de preços] It seems to be the direction we should have the highest likelihood of,” he points out.

A survey by XP estimates that gasoline has a contraction, within the IPCA, of 8.28% in August, followed by another, more moderate, in September (-0.67%). In the last quarter of the year, slight increases should raise prices by about 5%.

But the financial institution predicted that by the end of 2022, a liter would be sold about 15% cheaper than it was at the beginning of January. If that materializes, Brazilians can head into the next year paying just over R$5.60 per liter of gasoline.

However, this year’s easing may be short-lived: That’s because, if there is no change, starting in January, federal taxes on gasoline will be levied again — and put pressure on drivers’ pocketbooks.

“For 2023, there’s another conversation going. I think we’ll have to wait a little bit longer to be able to dig in. There are elections out there halfway that could change the scale of ICMS, the whole issue of PEC benefits in short, we’d rather wait until we understand,” he says. Newbury from Warren.