In September, China stopped importing meat from Brazil. The country announced a ban on Brazilian exports after two cases of BSE were identified at abattoirs in Minas Gerais and Mato Grosso.

The effect was immediate. In October, beef shipments were down 43% compared to the same month in 2020. As the ban continued – despite the World Organization for Animal Health claiming cases were atypical and spontaneous and, therefore, not posing a risk to the production chain – it was repeated. situation in november.

According to figures brought by the Brazilian Association of Refrigerators (Abrafrigo), exports of fresh and processed beef have decreased by 47% by volume, compared to November last year. The data was compiled from information provided by the Foreign Trade Secretariat, which is linked to the Ministry of Economy.

With sales to China likely to decline in the short term, so did the volume of animals slaughtered. With the decrease in demand, the price of live cattle fell in October, as the price of the Arabs was set at 255 Brazilian reais, which is about 60 Brazilian reais less compared to the beginning of September, according to the index sepia.

However, Brazilian consumers practically did not feel this decrease in their pockets.

This dynamic is evident in inflation indicators such as the IGP-M, prepared by the Getulio Vargas Foundation, which includes prices paid by both producers (PPI, IPA) and consumers (CPI, IPC).

According to data collected at the request of the article by the IPC coordinator, Andre Braz, the livestock component IPA (live cattle on pastures) has registered a contraction since September, declining by 5.92% in October. Beef declined in the IPA in turn, which reflects the price of the slaughtered animal, in September and November, recording the largest decline in the last month by 1.01%. 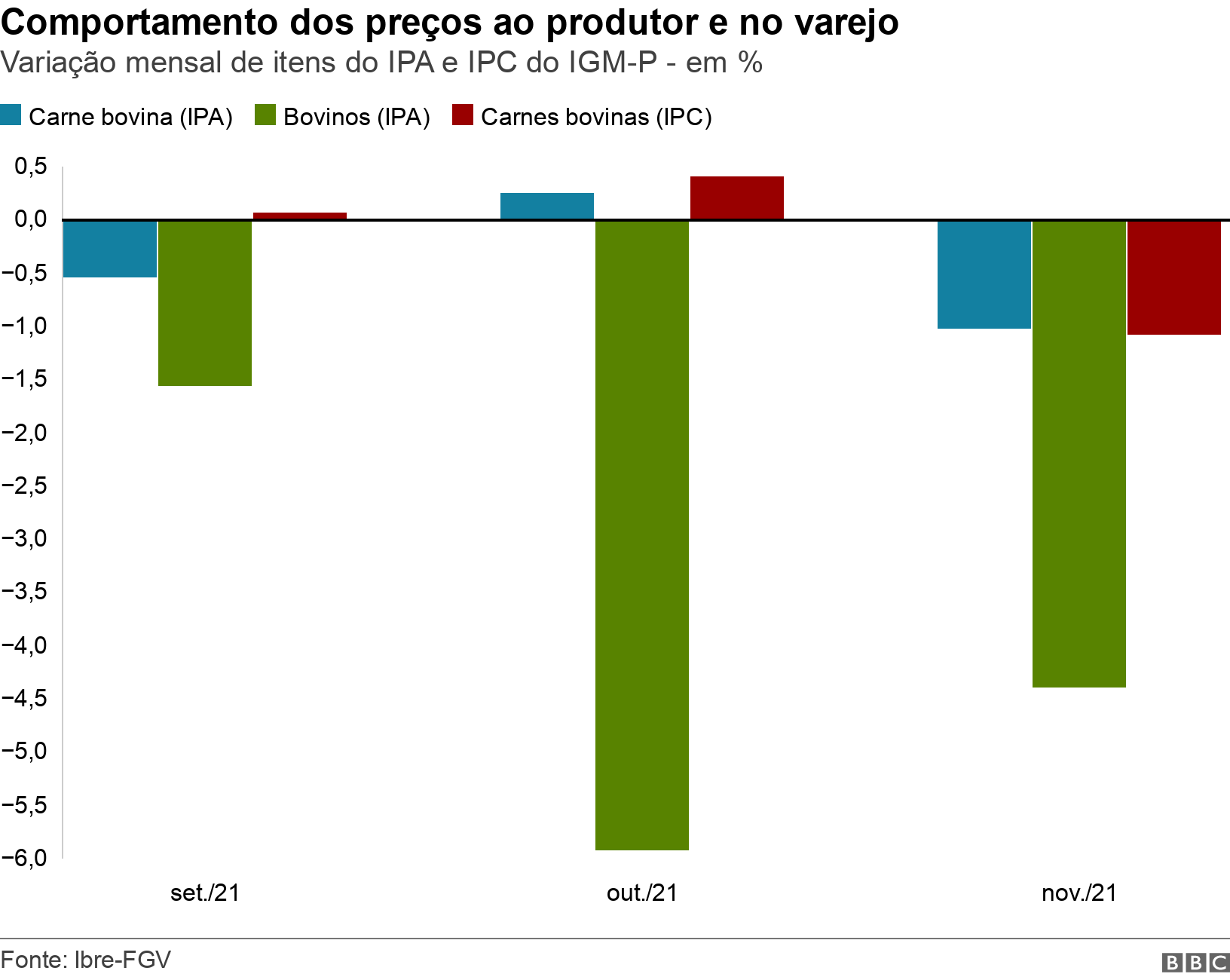 On the other hand, beef CPI continued to record its highest levels in September and October. The first decline came in November of 1.07% – but the relief may be short-lived.

“We have noticed that the meat sector is heating up again. So a new tightening cycle may begin, and this does not allow for a very long cycle of slowdown. We will have to monitor the behavior of prices in the future months “, assesses the economist.

Cepea (Centre for Advanced Studies in Applied Economics) livestock researcher Esalq/USP Thiago Bernardino de Carvalho identifies at least two reasons why the fall in the price of livestock is practically not felt in consumers’ pockets.

One of them was the permission given by the Department of Agriculture in October for storage for up to 60 days in containers (not just in cold rooms, as current health legislation mandates) for what was produced prior to the blockade, on 4 September. .

In late November, China gave the first sign of easing and allowed exports of certified meat at least until the day before the ban (September 3), which was then shipped to Asia.

Since then, the industry has been rebalancing its stocks, while the blockade is still in place.

Another factor mentioned by the researcher is the last link in the retail chain. In his assessment, butchers and supermarkets took the opportunity to buy cheaper meat in October for holiday storage — and he notes that the storage process, which includes refrigeration, is expensive.

“The consumer, if he can, won’t give up meat and barbecue at the end of the year. He’ll cut other products out first, and the supermarket knows that.”

There is also the possibility that retailers may have taken advantage of part of the price cuts by suppliers to increase their profit margins.

The text concluded that “the butcher and supermarket counters need to get involved in the chain and not present themselves as enemies.”

The report sought to find the Brazilian Association of Supermarkets (Abras), which did not comment until the closing of this text.

This whole situational problem occurs at a time when the price of beef is already under pressure due to a structural problem in the sector. Livestock prices have broken records for months due to the low availability of animals for slaughter – a reflection of the cattle breeding cycle itself, which includes periods of breeding and replacement for the animals.

This is because the beef production chain has a series of characteristics. It is not possible to increase or decrease the number of bulls on pastures in time, depending on the level of demand.

The gestation period of cows is about 9 months. The period when a calf becomes an animal ready for slaughter is about two years. All this makes the cycle longer than that of other proteins and lasts about 6 or 7 years.

When the price of bulls is high, as is the case now, the tendency is for the ranchers to send females (called “arrays” in the strip) for slaughter. Gradually, the supply of animals increases and the price of livestock tends to fall.

However, the smaller size of the females means smaller production of calves (in the sector they are called “surrogate animals”). It is for this reason that, at the next moment of the cycle, the trend is to increase the prices of calves.

This increase, in turn, encourages the retention of females, so that the prices of calves tend to decrease gradually. With fewer females available for slaughter, the price of cattle begins to rise, and the cycle begins all over again.

The cycle that began in 2018, Carvalho, illustrates when the industry is beginning to recover from the effects of Weak meat process, it should extend until 2023 or 2024.

The present moment has another advantage that contributes to raising prices. On the other hand, a stronger dollar and higher commodity prices pushed up animal feed prices, which often use corn and soybeans as raw materials. On the other hand, the severe drought that hit the central and southern region of the country reduced pasture areas and forced many producers to lock up their livestock, which led to an increase in feed expenditures.

As explained by Braz, of Ibre-FGV, there are already signs that the meat sector is heating up again. For example, boi arroba fat has already recovered from the decline observed in October and returned to peak values.

Thus, the rate cut indicated by the latest releases of the inflation index risks being just a whirlwind rather than a trend.

In the CPI, beef accumulated a 16.6% increase in the 12 months to November, nearly double the change in the closed-end index, which was 9.72%. Thus, even with the relief shown by the indicators, prices remain at a much higher level than they were a year ago.

On the other side of the equation, Brazilians’ income has shrunk as poverty has increased and the labor market has created more precarious jobs.

This last aspect appears in the Continuing National Sample Household Survey (PNAD) statistics, which show that the median income of workers has declined consecutively for 12 months, since October 2020.

Although the unemployment rate has decreased since May, it is still at a very high level – 12.6% of the workforce, or 13.5 million unemployed.

A worker can get 100,000 Brazilian riyals from FGTS | brazil news | Online Diary