São Paulo – The already challenging environment for risky assets, amid the financial noise in the local environment, tends to be more volatile next year as the presidential election approaches. Electoral uncertainty tends to negatively affect the stock market, exchange rates and short-term interest rates at least until the first round is determined.

This is shown by an analysis released by Bradesco on Wednesday (20) on the behavior of financial assets in the last six election cycles. According to the report, stocks, interest rates and the dollar began to interact more intensely with the elections in May of the election year itself, the period when nominations are officially launched and opinion polls are repeated.

The average behavior in the period showed a decline in the stock exchange from May until the elections, a depreciation of the exchange value, and an increase in default swaps (credit default swaps, which are default insurance, see more click here), an increase in Swap 360 (the one-year interest rate change contract in Brazil and the United States) and practical stability in 10-year interest rates (US Treasuries).

In terms of economic prospects, the survey showed that as of May, there was a decline in GDP growth expectations and an increase in inflation according to the broad national consumer price index (IPCA).

“When analyzing the behavior of the presidential election since 1998, we see that the stock market fell on average by 15% between May and the beginning of October of the election year,” wrote economists Mireia Bast and Renan Pasoli-Deniz, who signed the report. However, they indicated that this behavior may be related to several factors unrelated to the elections, such as international commodity prices, internal price shocks, and others.

Given the divergence of the US stock exchange, in order to control for external influences on prices, the Brazilian stock market fell, on average, by 13% between May and October of the election years. 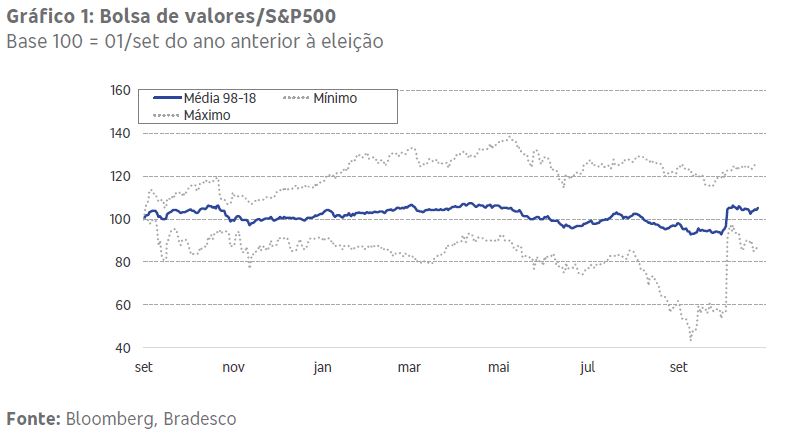 It is noteworthy that after the first round, the stock rose in the following months, practically returning to the level of May (-0.7%). The largest declines were recorded in Ibovespa, according to the survey, in 1998 and 2018, with declines of 42% and 17%, respectively.

The only year in which the Brazilian stock exchange reached a rise was 2010 (8%), when there was a decline (-3%) after the first round, a fact that was repeated only in 2014 (-3%). The pair of economists writes: “However, the dispersion of maximum and minimum values ​​is quite large.”

In the period analyzed, the exchange rate showed similar dynamics, with an average currency depreciation of 16% between May and early October of the election year, according to Bradesco. 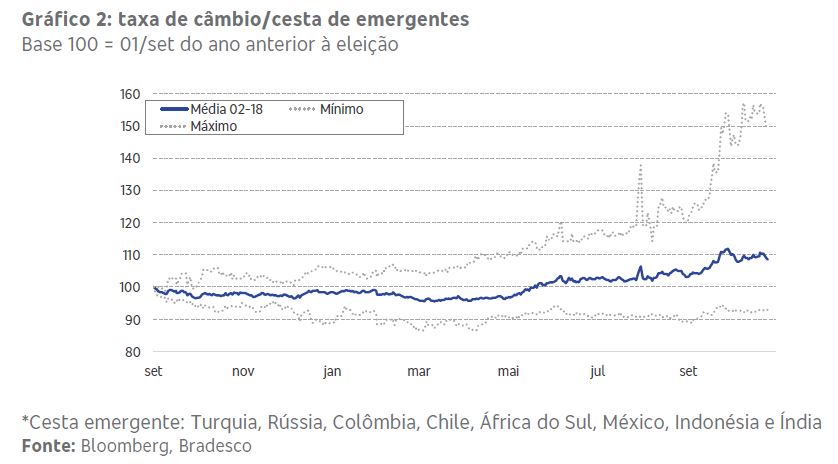 To control for external influences that may have affected the outcome, the bank used the emerging basket of currencies as a control. “On this metric, the average devaluation was 14% through early October. They highlighted that the largest devaluation occurred in 2002, with a decrease of 56%.”

According to Bradesco, even in the most recent elections, the effects on the exchange rate were only evident in May.

In the interest rate market, there was also heterogeneity.

“The behavior of 2002, in fact, is very different from other periods. Except for this election, on average, there was an opening of 0.27 dpi, assures the pair of bank economists.

In the chapter, the difference between the analyzed rate and the effective Selic rate and the controls used are 1-year and 10-year treasury are considered.

Finally, the analysis showed that election years also affected the growth outlook for the economy and inflation, with significant dispersion. Also in this case, the impact of the election became more visible after the middle of the election year, according to Bradesco.

Although also affecting growth expectations, the actual growth data did not register a significant negative impact in recent election cycles. A significant portion of the assets registered some correction with the electoral definition, returning to the beginning of the year levels. Economists conclude that every election cycle is different, due to its nature, the starting point of economic policy, interest, public debt and inflation are of great importance in the performance of the overall picture.

An unprecedented “Seven Secrets to Prosperity” course that combines teachings about quality of life and financial health. Make pre-registration free.

Volkswagen Polo and Virtus 2023 with an ab engine! More effective, the document reveals