Why does America innovate so much and Brazil doesn’t? The answer is simple: public policies. However, the process of constructing an innovation governance arrangement is not trivial. These two countries share many similarities such as continental dimension, regional economic leadership, presidential and federal systems, and more recently, they have also been affected by the effects of China’s rise in international trade. Despite these similarities, the difference between the innovative capacities and performance of the Brazilian and North American economies is striking and significant.

Brazil ranks 54th out of 132 economies evaluated. Global Innovation Index (GII), ninth among the upper-middle income groups and a worst-case factor, is less efficient than its potential, i.e. inefficient in translating inputs into innovative products and services. In the opposite direction, the United States ranks second in the GII and is highly efficient at transforming the pillars of the National Institute of Innovation (SNI) into the innovative performance of its economy, reflecting its complexity and leadership in the rankings. The cradle of the world’s largest companies and technology conglomerates, as well as major disruptive innovations.

The explanation for this disparity lies in three dimensions: the structure of public policies, finance and public-private cooperation. First, there is the configuration of public institutions and government programs aimed at supporting, encouraging and promoting the creation, introduction, diffusion, adoption and use of innovations. In the North American case, policy has historically been intersectional, spanning virtually all federal agencies except science and technology and defense. Construction of a set of general principles (Policy mix) follows the logic of layer accumulation, that is, new tools are developed with increasing complexity and continuity over time without replacing existing ones. While in Brazil, the theme is secondary on the agenda of presidents and changes are characterized by constant destruction and change, without enough time to produce significant impacts and without being evaluated.

The difference between the permanence of this policy in the United States and the volatility of Brazil can easily be measured by its finances. Despite methodological limitations in comparing these budgets, the following graph illustrates the evolution of research and development (R&D) costs essential to the innovation process. In the last decade, the US federal government alone invested an average of 164 billion dollars per year in this material, while the Brazilian average did not even reach 5% of this amount (US$ 8 billion). In addition to the level of this disparity, in the first case, there is an annual oscillation, but very residual (standard deviation of 6%), in Brazil it is about 25%, and these costs are subject to a serious process. Reduction since 2014. 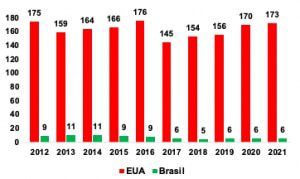 The third and final dimension includes characteristics of innovation policy, in particular, public-private collaboration. It’s a guiding principle for virtually all projects in the US, whether it’s partnerships with universities, labs and research centers, start-ups.Beginnings) and large corporations. Under the rationale of promoting competitiveness, the administration of this policy is at a common network development stage (Development network level)[1] In which these actors work in close collaboration to identify and support the most promising paths to innovation.

Another characteristic, focus on mission-oriented principles, has culminated in its partnerships in the development of critical technologies such as the Internet, computers, jet aircraft, civil nuclear power, and biotechnology. In practice, the US government not only corrects market failures, but above all, creates new markets with these technologies in various sectors of the economy. If the public administration prioritizes investment in education and basic research, the participation of the business community grows in the stages of applied research and development.[2]. On the other hand, in Brazil, despite the official discourse to value this cooperation, some projects based on these partnerships are effective and the participation of the private sector in R&D funding is not lower than that of the government (0.57% vs. 0.66% of GDP), from North American standards, approximately 2.3% of GDP.[3].

In short, becoming an innovative country and a leader in an increasingly complex, interconnected and competitive global economy is a huge challenge. In recent decades, the Asian Tigers and, more recently, China, have shown us that it is not impossible. However, building an innovation-led development plan cannot be done without long-term strategic vision, government prioritization, planning, and state capacity both in designing and effectively implementing financial and public policies.