Russian Foreign Minister Sergei Lavrov said on Tuesday that Russia would not rule out a meeting between the Russian president. Vladimir PutinAnd US President Joe Biden at the upcoming G20 meeting and will consider it if he gets it.

Speaking on state television, Lavrov said “Russia will be ready to listen to any proposals on peace talks” but could not say in advance what the outcome of the talks would be in practical terms.

The US had not responded to the Russian president’s speech as of the last update of this story.

However, according to Western intelligence services, the talk signals a part-negotiation posture for Moscow, which is losing ground in Ukraine.

The missile hit central Kiev as the reporter went live

This Tuesday, A day after one of the worst Russian attacks on KievUkraine declared Fresh bombings in strategic cities of the country. Missiles were fired at Lviv, near the Polish border, and Zaporizhzia, home to Europe’s largest nuclear power plant.

Due to the new Moscow offensive, Leaders of the G7 — the club of the world’s richest nations that recently excluded Russia — announced an emergency virtual summit.It will be held this Tuesday with the participation of the President of Ukraine Volodymyr Zelensky. 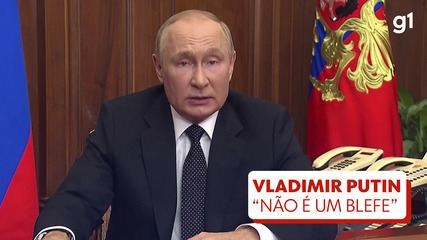 ‘It’s not nonsense,’ says Vladimir Putin during the speech

Despite the Russian president’s rhetoric, the Kremlin has taken an aggressive and counter-offensive stance. Two weeks ago, Vladimir PutinHe made the announcement to the nation on television Around 300,000 reservists were invited across the country, leading to a massive influx of young Russians..

A few days later, four regions of Ukraine – Kherson, Zaporizhzhia, Luhansk and Donetsk – held a referendum by Moscow on whether local citizens wanted to secede from Ukraine and join Russia.

Putin declared victory in public consultation and signed off on the annexation of the four territories two weeks ago in a ceremony televised on big screens in Moscow. The UN and the international community do not recognize this link.